Does Your Water Have A Chlorine Smell

As a halogen, chlorine is highly efficient at ridding water of most pathogens – microorganisms in your water that can be harmful to your health. Though chlorine in large doses can produce harmful health effects, the amount in your tap water is not typically harmful.

In addition, chlorine does something other disinfecting methods do not – it provides a residual effect.

After treatment, water still may need to travel long distances to storage tanks and distribution systems. In places where water is not used, the chances of pathogen regrowth increases. This can cause a major mess, including slime and biofilms that could contaminate all of the clean water being distributed through the system. The residual effect of chlorine helps to prevent this from happening.

Current studies show that drinking water with a small amount of chlorine does not cause harmful health effects. While this is true, some people are more sensitive than others to chlorine and other environmental differences, and there is a concern of long- term risk of cancer due to chronic exposure of trihalomethanes, which is a byproduct of the disinfection.

This has some communities looking at other options. Las Vegas has emulated many European and Canadian cities in switching over to harmless ozone instead of chlorine.

Ozone is effective over a wide pH range and is very powerful, however, there are higher operational costs.

Many times, particularly if there is a warm front in the spring, bacteria/algae blooms near the water source makes it necessary to add more chlorine to reduce the growth of microorganisms and keep the bug population low. This is an example of loading disinfectants into a system. This can also be prevalent after a known treatment issue or boil water alert.

Chlorines vs. Chloramines: What’s The Difference?

Chloramine is a chemical variant of chlorine that contains ammonia. It is generally safe to drink and use around the home in the same way traditional, chlorine-treated tap water would be.

Cities have commonly used both chlorine and chloramine chemicals to treat municipal drinking water since the early 1920s and 30s. Chlorine became widely used during World War I when ammonia shortages reduced the availability of chloramine. As a result, chlorine remains common, but chloramine is seeing increasing adoption, especially in densely populated areas.

Some populations, specifically individuals on dialysis treatment and those with respiratory issues, may be sensitive to chloramines.

If you or your family members fall into either of these categories, it’s a good idea to check with your local drinking water provider to see if a switch is coming to your area. Chloramine is also harmful for fish and aquatic animals, so you’ll want to pay close attention if you’re used to supplementing your aquarium with tap water — or consider a chloramine filter.

Why Is Chloramine Added To Water?

Water utilities typically use chloramine as a secondary disinfection method to ensure germs and other pathogens are removed from the water supply. It is most often used as a replacement for traditional chlorine, which can cause build up over time.

Chlorine can also have a shorter effective period when it comes to water treatment, so in certain areas where water has to travel farther, chloramines can be more effective to ensure long-term water disinfection.

Municipalities may also choose to use chloramine rather than chlorine because it can often lead to fewer complaints about taste and smell. Chloramine tends to have a less noticeable chlorine odor and taste while still protecting water safety and quality.

How To Remove Chloramine From Your Tap Water

If you’re among those affected by the presence of chloramines in water — and even if you’re not — you may want to consider a water filter to have fresher, better quality water in your home. There are many variations of filters, so it’s important to choose one designed specifically to remove chemicals like chlorine and chloramine.

Reverse osmosis filtration systems are a good starting point, since RO technology can effectively target and remove these kinds of chemical compounds. 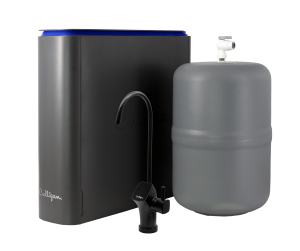 Reduce sediments in your water and contaminants that cause your water to appear, taste, and smell unpleasant. Your system can also lessen the taste and odor of chlorine, and prevent pipe damage and staining from low pH water. Additional customizations include:

Find solutions to your water problems immediately.
Get THE CLEAN WATER PLAYBOOK today!

A comprehensive overview of more than 15 common
water contaminants — and how to solve them.

Most water solutions are available for $9.95 per month for the first three months. A free, in-home water test is necessary to customize the perfect solution for your home. Please fill out this form to have your local water expert contact you today for accurate pricing.

Get an Office Assessment

Please let us know how many people are in your home or office, or how many 5-gallons of water you need, and we’ll contact you with accurate pricing.